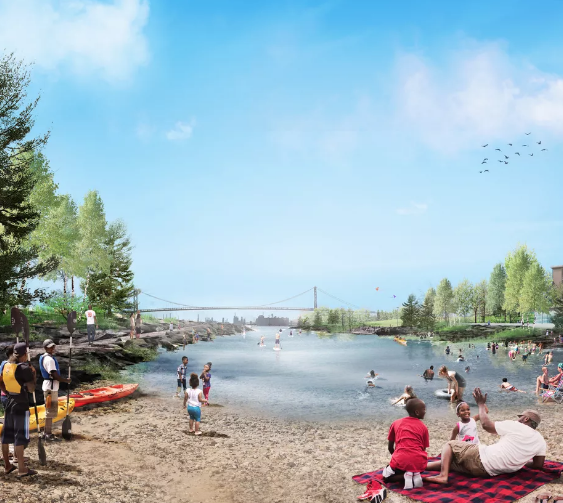 By Daniel Howes, The Detroit News

Detroit — The foundation endowed by former Buffalo Bills owner Ralph Wilson is contributing $100 million to help build a planned park and trail network on the west riverfront, effectively connecting the Ambassador Bridge with the MacArthur Bridge to Belle Isle.

The effort, which was announced Wednesday, will be replicated at LaSalle Park in Buffalo, where the longtime Grosse Pointe Shores industrialist became a civic fixture as the founding owner of its NFL franchise that began league play in 1960.

Altogether, the Ralph C. Wilson Jr. Foundation will invest $200 million in parks and trail initiatives totaling 250 miles, and each will be named “Ralph C. Wilson Jr. Centennial Park” to mark this, the 100th year of his birth. Born 100 years ago today, he died on March 25, 2014, and his trust sold the Bills six months later.

The foundation’s grants are a major boost to the redevelopment of Detroit’s riverfront, long an industrial eyesore evoking the city’s gritty past instead of a gleaming international showpiece facing Canada to the south. Not for much longer, courtesy of the low-key tycoon whose sprawling empire mostly escaped notice in his hometown.