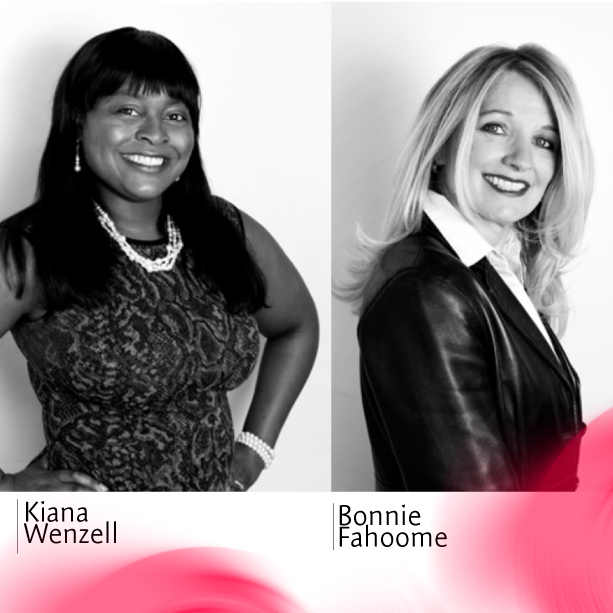 By Olga Stella, Vice President of Strategy and Communications at the College for Creative Studies

Design Core Detroit announced that Bonnie Fahoome and Kiana Wenzell have been promoted to Co-Executive Directors. They succeed Olga Stella who has served in that role since 2016, Stella will continue to provide oversight to the organization in her role as Vice President of Strategy and Communication at the College for Creative Studies (CCS), of which Design Core is a part. Fahoome and Wenzell have both held leadership positions in the organization for several years.

Fahoome has served as Director of Business Programs, leading Design Core’s work to support freelancers and small design businesses. Over the last 5 years in this role, Fahoome grew membership in the Detroit Design Network to almost 120 businesses, developed Design Core’s Design Guide series to help decision makers from other industries work with designers of all disciplines, and created a new business matchmaking service to strengthen the market for regional design services. Prior to Design Core, Fahoome spent nearly 10 years serving the entrepreneurs and small businesses of Detroit through other organizations and programs.

Wenzell has served as Director of Detroit Month of Design, organizing the annual design festival and other public programming. Over the last 6 years at the organization, Wenzell expanded the reach of Design Core’s public events, making Drinks x Design one of the region’s best attended networking events. Promoted to Director of Detroit Month of Design in 2020, Wenzell successfully implemented a hybrid month-long festival with 70+ events attracting 50,000 attendees, exceeding all prior records. An interior designer by training, Wenzell has more than 15 years experience researching, planning and executing design projects in metropolitan Detroit.

“Working together, Bonnie and Kiana have the vision, leadership and collaborative style that will propel Design Core into its next phase of impact for Detroit’s design community,” said Olga Stella, vice president of strategy and communications at the College for Creative Studies. “I could not be more confident and excited about the organization’s future and look forward to supporting them in their new roles.”

“Design Core Detroit is an important asset to CCS and the community,” said Don Tuski, president of College for Creative Studies. “I’m excited about the future opportunities to leverage Design Core’s programs, partnerships, and expertise to bring even greater value to CCS students and programs. Congratulations to Bonnie and Kiana on their well-deserved promotion.”

Design Core was originally formed as a partnership between College for Creative Studies and Business Leaders for Michigan in order to support the growth of Detroit’s creative economy. In December 2015, Design Core successfully obtained a designation for Detroit as a UNESCO City of Design, still the only one in the United States. In April 2018, Design Core released its strategy to activate the designation to develop Detroit into a global center for the practice of inclusive design, developing several programs in service of that strategy.

Throughout the pandemic, Design Core doubled down on its service to Detroit’s independent and small design businesses, as well as the power of inclusive design to help develop more resilient, successful businesses and community solutions. It began working more closely with CCS colleagues on programs and initiatives to leverage resources and increase its impact.

Design Core Detroit champions design-driven businesses and their role in strengthening Detroit’s economy. It offers services to strengthen, grow and attract design businesses, increase market demand for design services and tells Detroit’s design story locally and globally. Design Core is the steward of Detroit’s UNESCO City of Design designation and is part of the e College for Creative Studies.

About College for Creative Studies

Located in the heart of Detroit, the College for Creative Studies (CCS) is a world-class institution that educates artists and designers to be leaders in the creative professions. A private, fully accredited college, CCS enrolls more than 1,400 students pursuing Bachelor of Fine Arts (BFA), Master of Arts (MA) and Master of Fine Arts (MFA) degrees.