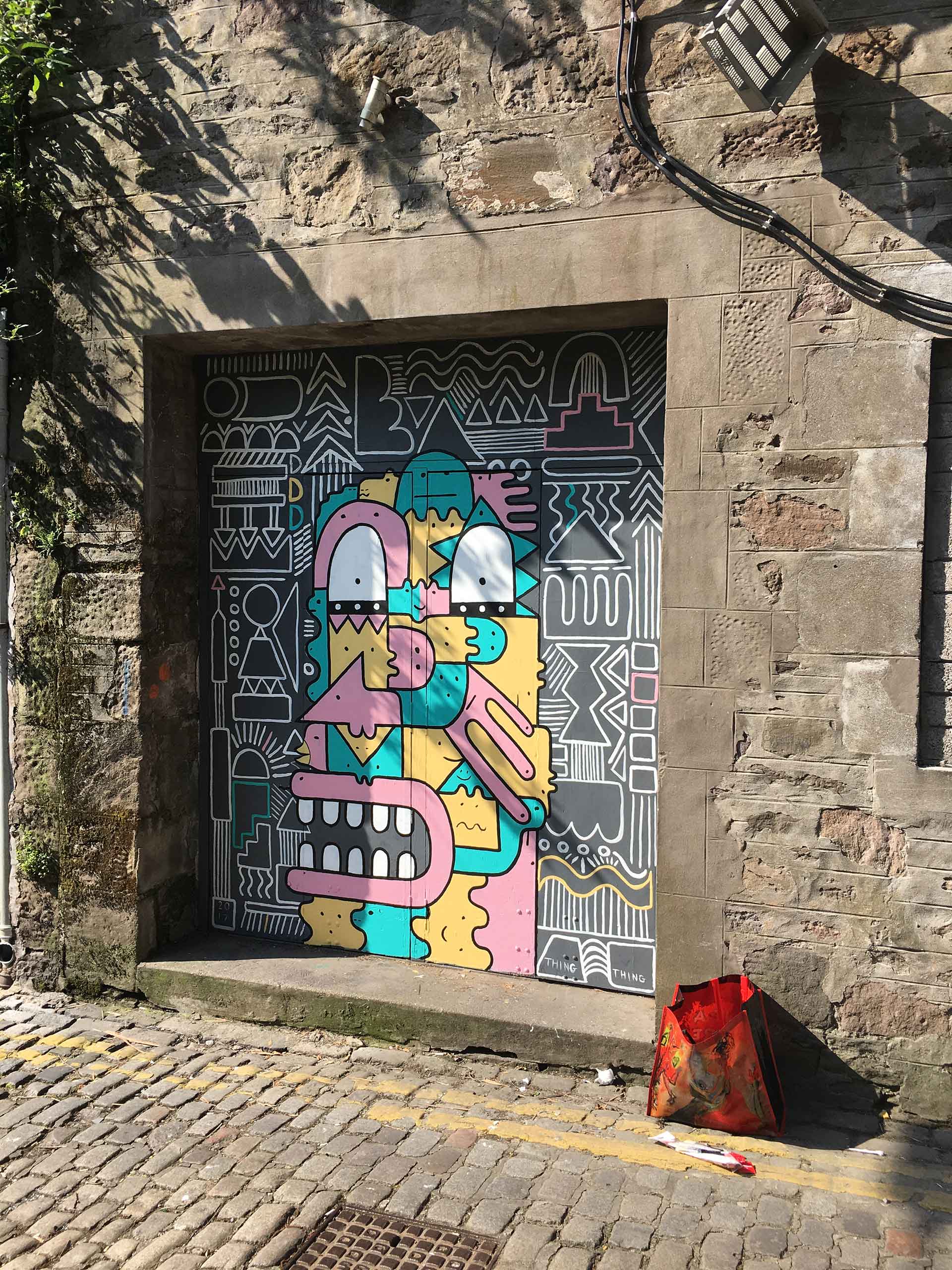 In May 2017, Detroit Design Collective was invited to participate in “Factory Floor,” an exhibition exploring the role of small-scale maker/manufacturers in post-industrial cities. Thing Thing members Simon Anton and Rachel Mulder were invited to present their work, lead a workshop, and paint a mural as part of Dundee’s Open Close Dundee street mural project.

Here’s what Simon Anton and Rachel Mulder had to say:

The opportunity to participate in the Dundee Design Festival had a powerful impact on our business in myriad ways. We experienced tangible growth, developed new skills, and cultivated ideas and perspectives that will influence the trajectory of our practice.

After applying to exhibit in the festival we had a long conversation with the curator about our work and how it fit into the festival’s theme of Factory Floor. Inspired by these conversations, and using the budget allotted to us by the Detroit Creative Corridor Center, we were able to create a whole new body of work. The exhibition was designed to show artists’ work at all stages of development – and this curatorial transparency was the ideal opportunity for Thing Thing to experiment with new methods of making. This attitude of experimentation allowed us to push existing techniques forward and discover new aesthetic qualities.

Once we were in Dundee we made a ton of connections with local and international artists, designers, event organizers, PR teams, and press. There were several spontaneous brainstorms for future collaborations and many Dundonians are planning on visiting us in Detroit. As the only international participants in the festival we were a main focus by the press. We were written about on BBC online as well as gave a live interview on BBC Scotland radio. We were photographed for a local and national newspaper and gave two video interviews for STV. The DDF hosted a Pecha Kucha presentation night and we were the closing presenters. We gained 100+ instagram followers in the duration of the festival and are continuing to generate buzz in the UK. After the festival we were invited to contribute a write-up to London’s Design Week magazine about design in Detroit. There is a lot of potential for future work in the UK and we are actively pursing these leads.

In addition to the tangible take-aways, the festival was an opportunity to develop new skills as a practice. The flurry of press opportunities allowed us to develop our skills of public presentation across the mediums of radio, tv, writing and photography. The tight time constraint and travel situation forced us to create an exhibition that could fit within two suitcases – the concept of a collapsible, travel-friendly installation will open the door to many new opportunities in the future. As a side project to our design exhibition Thing Thing painted a mural as part of OpenCloseDundee’s first mural painting festival. This was our first mural – encouraged by the resoundingly positive response to the work we are now planning on incorporating this art form into our practice.

Through the whole festival experience we were told “Well Dundee and Detroit are really quite similar aren’t they?” At first I wasn’t sure if that was true – Detroit’s qualities and issues seem so particular to it’s own unique history, what can this quaint Scottish city compare to our Detroit? Size wise the cities are way off – Dundee is less than half the size demographically and much smaller spatially. Dundee’s population is somewhat homogeneous while our city has a rich and contentious history of diversity. These issues, amongst others, suggest that the cities are actually quite different – however, it was when people started talking about the struggles the city has gone through that I started to sense a similarity between us. Dundee has a strong, proud history of industry and manufacturing in the city – from ship building in the late 1800’s to textiles and printing in the mid 1900’s. Unfortunately this industry left the city and since the 80’s Dundee has experienced intergenerational poverty, exodus from the city, drug problems, and a bad reputation throughout the UK. Understanding some of our shared suffering I was able to look at the efforts of the Dundee Design Festival in a new light.

It is not just design for design’s sake, or design for designers. The active goal of so many artists and organizers is to regenerate their cities using arts and culture as the driver. They referenced Glasgow and Edinburgh – two larger neighboring cities that have become thriving creative, cultural cities after experiencing post-industrial declines. And I realized, isn’t that what we are striving for in Detroit? In that moment I was able to see both the strength and the spirit inherent in the UNESCO creative cities network. Through the power of networks, local talent and ideas can be amplified in a foreign city. The trip to Dundee elevated our practice, it elevated Dundee, and it elevated Detroit. Dundee was the host this time, but next time it will be Detroit and we will have the buzz, resources, and perspectives of international visiting designers. Understanding this schema it became clear the part that Thing Thing plays in this – that by making work that is rooted in Detroit but is relevant abroad we are helping to grow Detroit as a city of design.

« Analyzing the industrial ecosystem in Detroit