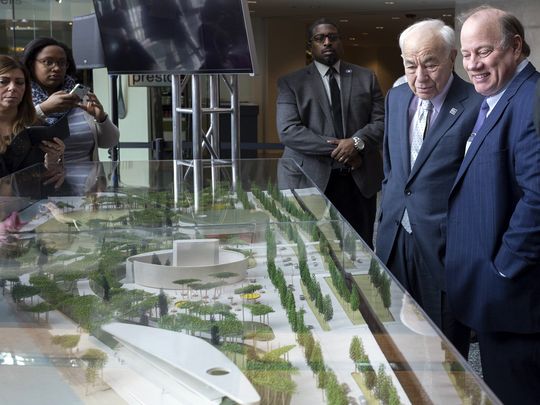 One day Detroit's West Riverfront Park will allow Detroiters to do what they cannot do almost anywhere along the river except on Belle Isle — put their toes in the water.

The creation of a new beach and inlet carved into the waterfront is the centerpiece of an ambitious plan for the 22-acre parcel west of downtown that will soon become the city's latest attraction.

The Detroit Riverfront Conservancy, which builds and manages the RiverWalk, announced Tuesday that it has selected Brooklyn-based Michael Van Valkenburgh Associates to design the city's 22-acre west riverfront park.

The park is estimated to cost $50 million, with the money to be raised through donations, and it should be finished in four to five years.

At the Renaissance Center, the conservancy announced that the Van Valkenburgh team beat out three other teams that had also been selected as finalists in a process that began last year. All four teams presented their elaborate proposals for the park's design in a daylong public event in February.

Analyzing the industrial ecosystem in Detroit »