The Albert Kahn Legacy Foundation (AKLF) honors the life, innovations and global impact of architect Albert Kahn. The foundation, incorporated as a non-profit organization in 2020, seeks to collect, preserve, maintain, display and make available to the public materials related to the life and work of Albert Kahn, so that researchers, students, historians and the general public will know and appreciate how his designs and ideas changed industrial America and helped make Detroit the manufacturing capital of the United States during the first half of the 20th century.

“Albert Kahn: Creating the Modern World” celebrates the work of Albert Kahn (1869-1942), Detroit’s most important architect of the first half of the 20th century and the world’s foremost industrial architect of his day. Kahn’s work enabled the creation of America’s modern industrial enterprises, created iconic office and civic buildings, and inspired the streamlined modernist designs that followed. The exhibit tells the story of historically significant architecture and design that has stood the test of time.

Using text and numerous photos, the exhibit shows the innovative genius behind the design and building of many of Detroit and Michigan’s most iconic structures–from the automotive factories of the early 20th century, such as the Packard Plant and Ford’s sprawling Rouge complex, to numerous Detroit landmarks, including the Fisher Building, the Detroit Athletic Club, the Belle Isle Aquarium and Conservatory. During the height of the Art Deco period, Kahn designed the former General Motors headquarters, the Edsel and Eleanor Ford House, and many buildings on the University of Michigan campus, including Hill Auditorium and the Carillon Tower.

Open during business hours and weekends 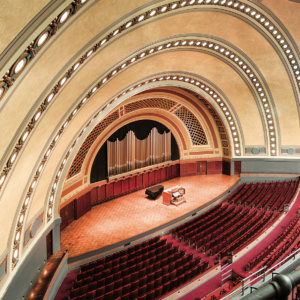