Michigan Opera Theatre, one of the nation’s most vibrant nonprofit arts organizations, is committed to presenting opera and dance of the highest artistic caliber. Founded in 1971 by Dr. David DiChiera, the company’s mission is to serve as a major cultural resource to the state of Michigan and the city of Detroit. The organization is led by President and CEO Wayne S. Brown, the Gary L. Wasserman Artistic Director Yuval Sharon, Associate Artistic Director Christine Goerke, and Chairman of the Board Ethan Davidson.

Borrowing from the finale of Mozart’s Marriage of Figaro, in which Count Almaviva pleads for—and ultimately wins—the Countess’s forgiveness, BLISS replays these three minutes of the opera with the same cast and same orchestra without pause for twelve hours. Creating the feeling of an eternal looped moment of repentance and grace with some of the most heavenly music Mozart composed, BLISS is a staggering artistic achievement.

Sold out in New York and Los Angeles, BLISS appears in Detroit as a community experience for listeners to come as they are and come and go as they please. This recreation of Kjartansson’s original performance features singers in period costumes on the traditional set. BLISS will mark the first live performance being performed in the historic Michigan Building Theatre since its conversion to a parking center, breaking a fifty-year performance hiatus in the space. Re-staged by MOT Artistic Director Yuval Sharon, BLISS reflects the overarching theme of this season: music possesses the power to heal; it can hold us eternally in forgiveness and grace. 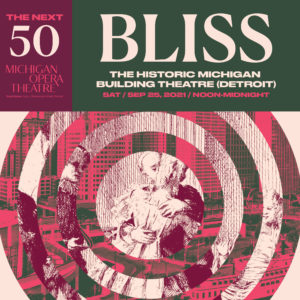