C.A.N. Art Handworks was founded in 1984 by Carlos Nielbock, an architectural ornamental metal worker. He specializes in historical metal restoration and has worked on many of Detroit’s historical buildings and monuments. He is also the inventor of the Detroit Windmill, which he received a patent for this year. You can see his windmills and elaborate gates, fencing, and gazebos he has designed and fabricated throughout Detroit and the Metro Detroit area. Carlos Nielbock is also the Detroit UNESCO City of Design ambassador and has taught classes worldwide.

This event will showcase the Sky Garden as a community learning site, while also offering tours of the other original Detroit Windmill designs on display at C.A.N. Art Handworks. Posters illustrating the newly patented Detroit Windmill’s technical capabilities, signage highlighting the Sky Garden’s features, and C.A.N. Art Handworks’s Master Plan outlining a vision of social and economic transformation in Detroit will also be on display, with music and food available.

Carlos Nielbock, President and Founder of C.A.N. Handworks in Detroit, has been working with Professor Christopher Pannier and students from the University of Michigan-Dearborn since the Fall of 2020 to develop the Sky Garden at C.A.N. Art Handworks as a completely upcycled and off-grid source of green energy, powered by wind and solar energy. Nielbock has also been working with UM- Dearborn professors Paul Draus and Marcus Harris to develop the potential of the Detroit Windmill as a social entrepreneurial enterprise. 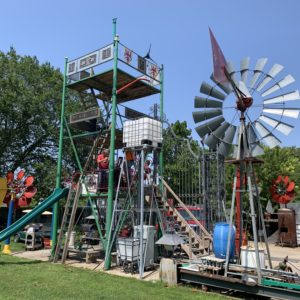