Motown Museum is the beating heart of the extraordinary Motown legacy—a destination that brings together people and ideas from different generations and celebrates the past while simultaneously building a bridge to the future.

The Still Going On exhibition is a walking tour that stretches from Woodward Avenue to the front steps of Hitsville U.S.A. on West Grand Boulevard. In celebration of the 50th anniversary of Marvin Gaye’s album What’s Going On, the installation features selected tracks paired with historical and contemporary photographs that prompt us to consider what has and hasn’t changed since Marvin first asked us “What’s Going On?”

What’s Going On has lingered in American cultural memory as it continues to speak to the widespread social struggles that are still going on decades after its release in 1971. Enraged by the suffering he saw across the US, Marvin Gaye composed a musical collection that soothed a nation divided by a war abroad in Vietnam and racial tensions at home.

Drawing upon the jazz, gospel, and Afro-Caribbean music that inspired him, Gaye collaboratively produced a groundbreaking album that confronted the racism, violence, imperialism, and poverty that plagued the nation. As a notable departure from his previous work, the lyrics of What’s Going On channeled Gaye’s personal frustrations during this divisive era. The masterpiece altered his career’s direction and amplified the position of social messaging in mainstream music. 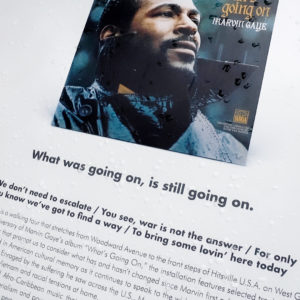