Obama Gallery Opening Featuring “Yes, We Can” by Chazz Miller

The Obama Building, The Platform

The Platform launched in 2016, focused on becoming a driving force in the rebuilding of Detroit. We are committed to inclusive development, working within the city of Detroit and across neighborhoods from center-city, to the westside and eastside. Our team has decades of experience and a legacy of successful developments in Detroit. Our vision includes quality residential, commercial and retail opportunities. We develop in ways that honor and contribute to Detroit’s existing social and physical fabric with the goal of creating places and spaces in Detroit that bring people together. Our mission embraces revitalizing neighborhoods, inspiring the next generation and using design as a tool to make Detroit a great place to live.

The “First Dance” mural, featuring President Barack and First Lady Michelle Obama dancing at the 2009 inauguration, by local artist Chazz Miller was prominently exhibited atop the once-dilapidated building in Detroit’s Old Redford neighborhood affectionately known as The Obama Building. In 2020 The Platform completed a full renovation of the building bringing four residential apartments and nearly 9,000 square feet of retail space to the corner of Grand River and Lahser. Keeping the name, The Obama, was done to celebrate the building’s history and honor the wishes of the community stakeholders who were engaged in a design process to formalize the building’s identity. The “First Dance” mural now has a permanent home inside the public art gallery at The Obama. The gallery was designed to celebrate the importance of art to the Old Redford neighborhood by featuring rotating art installations by local artists. The first exhibition debuts a series of work by Chazz Miller titled “Yes, We Can”. We invite you to join us for the opening of The Obama Gallery to view the permanent home of the “First Dance Mural”, and experience the “Yes, We Can Exhibit”, which will take place during the first annual Old Redford Neighborhood Festival, featuring food trucks, music, and family activities. 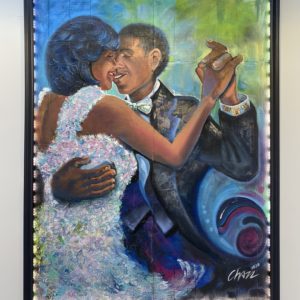