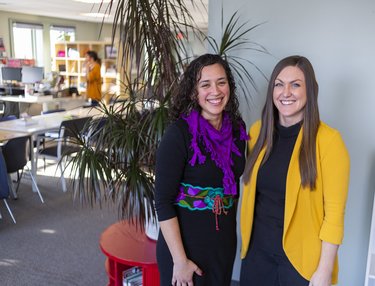 When it comes to succession planning, Living Arts is taking a holistic view to developing a strong bench.

Its efforts extend beyond grooming individual successors for leadership roles and cross-training to ensure seamless transitions.

It’s focused on ensuring financial transparency so staffers better understand where revenue comes from, how it’s spent and how they and their departments play into that. It’s also included staff in strategic planning sessions and created an inclusive culture that empowers every employee.

“This is about being proactive … creating culture, paying attention to people … creating relationships (and) the intentionality, especially for a small organization,” Executive Director Alissa Novoselick said.

The moves have helped Living Arts retain 92 percent of its 54 employees over the past three years.

At the same time, Living Arts has focused on building awareness of its mission with peer organizations. And that’s helped create a pipeline of interested candidates it can look to when it does need to fill roles.

“As the economy changes, we need to do everything possible to be an organization where people see themselves growing and thriving,” Novoselick said.

“By strengthening our culture .. our mission … our relationships with peers in southwest Detroit … in the education (and arts) space, the organization has mechanisms for succession planning (built in),” she said.

Living Arts’ organizationwide view of succession planning, something other nonprofits both small and large can replicate, has earned it the title of Crain’s 2019 Best-Managed Nonprofit.

Youth arts education programs led by professional artists or “teaching artists” in early learning environments, K-12 classrooms and sites outside of school in Southwest Detroit are the bedrock of Living Arts’ programs.

It also works with arts educators to infuse art in the curriculum and provides professional development for educators.

It’s serving 3,000 children, families and educators annually, through efforts including work in 10 Detroit Public School Community District schools and partnerships with other nonprofits like Boys and Girls Club of Southeastern Michigan, delivering programs at its new site.

It operates on a $1.1 million budget for fiscal 2020 with 54 employees. It diversified its revenue — mostly grants three years ago. Today, about a third of its budget stems from income earned from fees for out of school programs, individual and corporate giving.