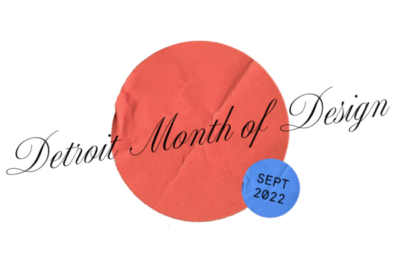 THE TWELFTH ITERATION OF MONTH OF DESIGN
Detroit Month of Design 2022 will explore how the design of products, places and experiences strengthen social cohesion and ignite joy.

DETROIT, MI - Design Core Detroit is announcing the twelfth annual Detroit Month of Design, taking place September 1-30, 2022. This edition will feature over 80 events spanning from exhibitions and installations to workshops, talks and tours. Events will take place across the city of Detroit and into the surrounding metro area at indoor, outdoor and virtual venues.

This year, Detroit Month of Design’s programming centers design strategies with the capacity to strengthen community resources and mutual aid. Focused on the theme of unity, this iteration will seek to uplift our interdependence so a more collaborative and accessible world can emerge. Design Core Detroit sees designers as key players in cultivating unity and interdependence within communities. As such, this year celebrates all facets of design—from the urban planning and landscape decisions that frame our cities and lives to the fashion, furniture designers and artists that shape our cultural mindsets and aesthetic sensibilities.

​​“As we put together this year’s offerings, it became clear that Detroiters design differently and have since the turn of the 20th century” said Kiana Wenzell, co-executive director of Design Core Detroit. “We are a Midwestern city with a very particular history and geography, which creates the perfect catalyst for an innovative approach to design. This has allowed us to have hyperlocal impact with global influence. Through the generous support of this year’s title sponsor, William Davidson Foundation, our goal is to provide a platform for Detroit’s great design thinkers to converge and for the public to experience the transformative role design plays in their lives.”

Though Detroit Month of Design is co-created with local designers, curators and organizations, Design Core Detroit will produce and host several key events including Eastern Market After Dark (EMAD). A staple in the month’s lineup, EMAD will return with a district-wide night market and open-studio featuring multiple galleries, retailers, brand activations, music and more thanks to the support of the John S. and James L. Knight Foundation.

“Detroit has been and continues to be one of the great design cities in the world. Detroit Month of Design highlights and underscores the brilliance coming out of our city and the people who push the boundaries and move us forward,” says Nate Wallace, Director of Knight Foundation Detroit.

Detroit Month of Design will highlight key players from Detroit’s design history while also shedding light on the city’s future and emerging talent. As the USA’s only UNESCO-designated Design City, Detroit models the future-facing creative potential of post-industrial cities. Additional event highlights include:

Detroit Month of Design By the Numbers

ABOUT DETROIT MONTH OF DESIGN
Detroit Month of Design is a citywide collaboration of creativity that gathers designers and the greater community to celebrate Detroit’s role as a national and global design capital.

Every September, partners across Detroit—from emerging studios to established companies and educational institutions—come together to show off their latest works and ideas. These cross-disciplinary events take place in all corners of the city, highlighting the talent and innovation that makes Detroit a UNESCO City of Design.

ABOUT DESIGN CORE DETROIT
Design Core Detroit champions design-driven businesses and their role in strengthening Detroit’s economy. It offers services to strengthen, grow and attract design businesses, increase market demand for design services and tells Detroit’s design story locally and globally. Design Core is the steward of Detroit’s UNESCO City of Design designation and is part of the e College for Creative Studies.

ABOUT COLLEGE FOR CREATIVE STUDIES
Located in the heart of Detroit, the College for Creative Studies (CCS) is a world-class institution that educates artists and designers to be leaders in the creative professions. A private, fully accredited college, CCS enrolls more than 1,400 students pursuing Bachelor of Fine Arts (BFA), Master of Arts (MA) and Master of Fine Arts (MFA) degrees.