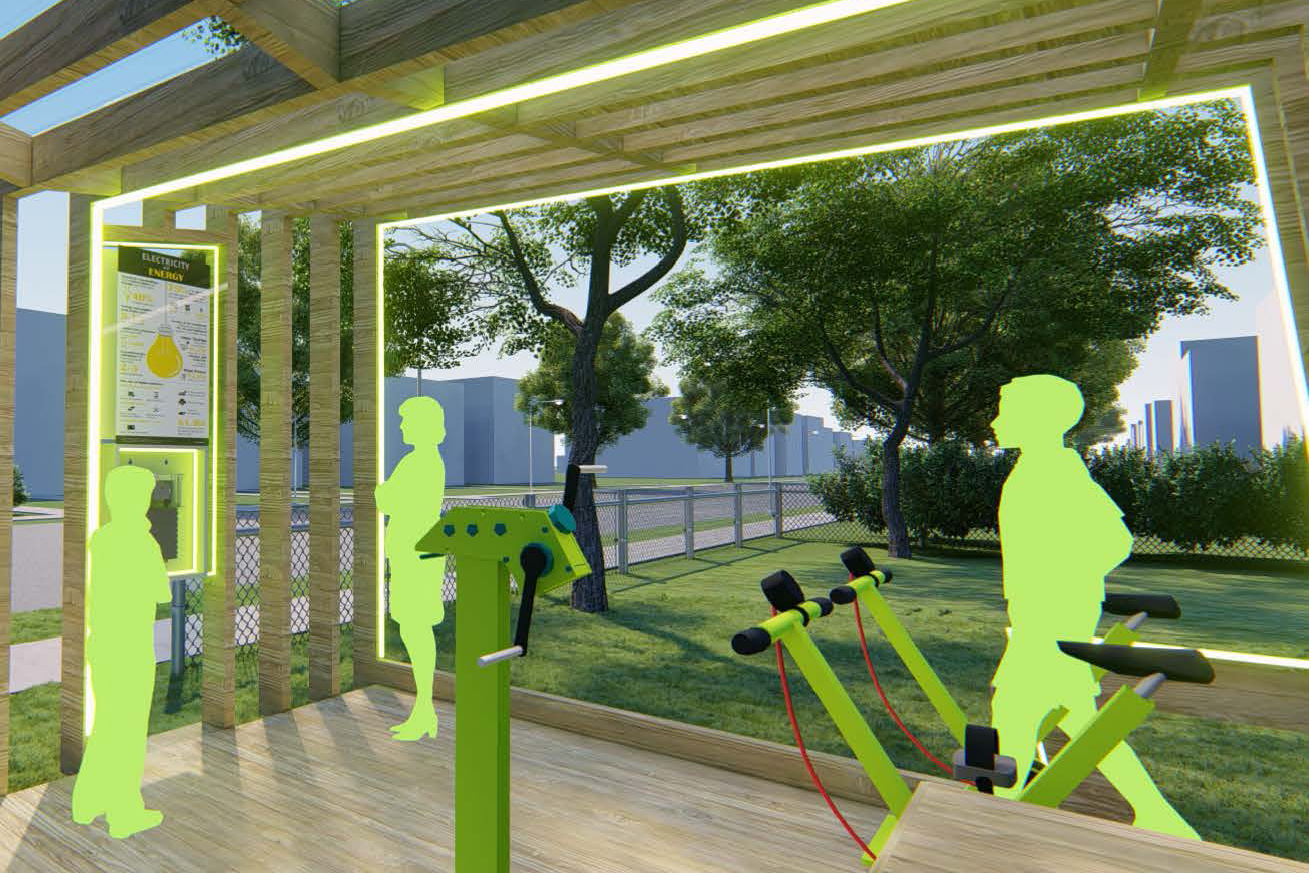 Detroit, MI – June 13, 2019 – Design Core Detroit is pleased to announce the winners of the first edition of Detroit City of Design Competition: Cyclerate by SmithGroup; Garden Novella by Other Work; and 3Rooms by Collectif Escargo. The prototypes will be located in Hope Village, Southwest Detroitand Grandmont Rosedale, respectively. As an international, multidisciplinary competition, designers hailing from all 31 UNESCO Cities of Design were invited to prototype design solutions for Detroit neighborhoods that address safety and walkability. Supported by the John S. and James L. Knight Foundation, the goal of the competition is to design and test creative, innovative design solutions that make it easier for all Detroiters to move freely, safely and efficiently around their communities.

Design Core Detroit received 26 submissions from local and international design teams. A jury composed of community representatives, local and international design expertise narrowed the submissions to three finalists for each neighborhood. The pool of finalists hail from Detroit, MI, Montreal, Canada and Turin, Italy. Jury members evaluated the submissions based on creative merit, appropriateness of solution for location and value for cost.

“With a design that integrates and highlights unique aspects of Southwest Detroit’s diverse cultural background, Garden Novella by Other Works supports our community’s vision for a healthy and vibrant neighborhood,” said Myrna Segura, the Director of Business Developmentat the Southwest Detroit Business Association. “By providing a platform for our community members to share their stories, we are forming a welcoming space where we all have the opportunity to express and preserve who we are.”

Debuting in Beacon Park to an audience of over 40,000 during Detroit’s Month of Design in September 2019, the three prototypes will ultimately be moved to their respective neighborhoods in April 2020, where they will remain for four months. Each winner is commissioned $20,000 for the design and implementation of the prototype.

“We are inspired by the innovation presented in the winners and finalists and the way they demonstrate the value of design to the community,“ said Olga Stella, Executive Directorof Design Core. “We hope these installations will peak the interest of private and public groups to commission the winning design teams to create permanent fixtures in these and other neighborhoods.”

"Urban spaces have a tendency to become hard and cold if left unattended,” said Caitlin Marcon, Deputy Directorof Complete Streets, Department of Public Works. “Durable materials that meet our need for longevity sometimes do not spark our desires for beauty. These prototypes harness the creative and softer qualities we seek while being functional for street life and gathering." 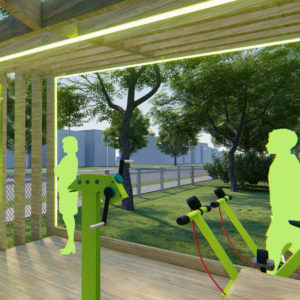 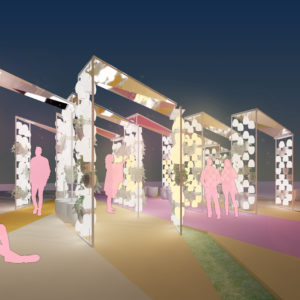 Garden Novela by Other Works — Southwest 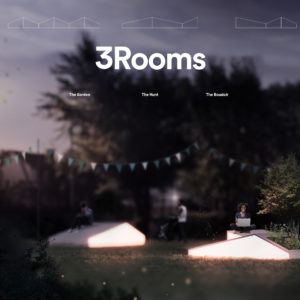 Hope Village: CYCLERATE by SmithGroup - Detroit, MI
Cyclerate aims to enhance public safety through unity, lighting, communication and play. The installation, which lights up using kinetic energy generated by hand-powered cranks and stationary bike generators, encourages the community to work together to illuminate the structure. Participants can also engage in a friendly competition with one another to identify who can produce the greatest power output on the cycles. Expect to be surprised by the power produced through real-time statistics. The installation currently features LED lighting, Bluetooth speakers and USB power charging stations. With its built-in expansion capability, the scalable structure can accommodate additional cycles, componentry and lighting. CYCLERATE will be located on the Southwest Corner of Dexter and Chalfonte.

Southwest Detroit: Garden Novella by Other Works - Detroit, MI
Garden Novella is a platform to express cultural, collective and individual identity. It weaves together recorded stories from Southwest residents to serve as a guide through a modular system of welcoming vessels. Sun powered lanterns, hanging gardens, seating and the recorded stories combine to create an interactive environment. The featured stories express the double consciousness experienced by many in the Southwest community; they aim to connect generations, repair the damage caused by repatriation and explore the process of translation in a bilingual community. Garden Novella will be located on the Northwest corner of Vernor and Clark St.

Grandmont Rosedale: 3Rooms by Collectif Escargo - Montreal, Canada
3Rooms consists of three spaces that are intimately linked to the world of the house— simultaneously conveying a sense of belonging and celebrating the beauty of united communities. The first “room” is ‘’Le Jardin’’ (The Garden), where the community is invited to participate in agriculture. ‘’Le Boudoir’’ is for nap lovers, readers and anyone who desires a rest in the shade of fruit trees. Finally, "The Hut" features a steeperincline, making it a perfect spot for anyone who wants to be a little more playful. Each module lights up in the evening with a soft glow, functioning as a fireplace in the middle of the neighborhood. The hue alternates from red, blue, mauve or multicolored. 3Rooms is a safe cocoon for improvised gatherings. Like a poetic metaphor of the surrounding houses, it is merry, bright, colorful and full of life. 3Rooms will be located on the corner of Grand River and Puritan. 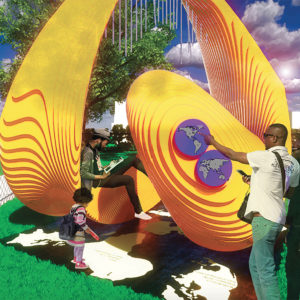 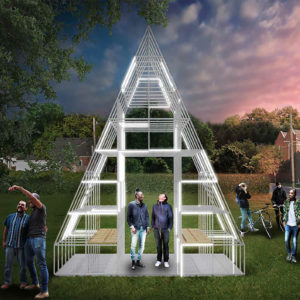 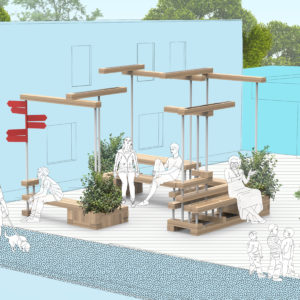 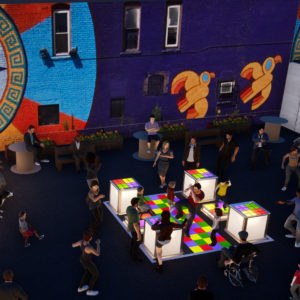 D-Tales by Team Up the Frequency — Southwest Detroit 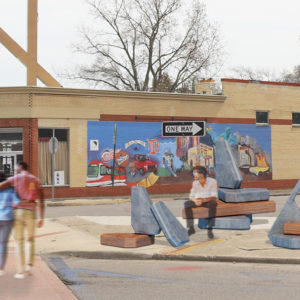 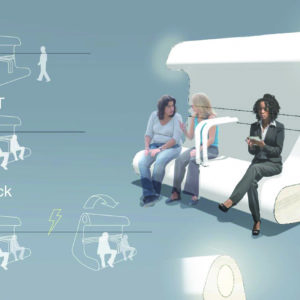 Site #2: Southwest Detroit | Community Partner: Southwest Detroit Business
Association Southwest Detroit includes Mexicantown and W. Vernor & Springwells, two of the City’s most popular, walkable business districts, which are known as the most culturally, racially and economically diverse areas of Detroit. The Association is a coalition of businesses and community interests committed to facilitating the continuation and enhancement of a stable, economically healthy Southwest Detroit. The Association establishes collaborative relationships by engaging community stakeholders, residents and business owners in the revitalization process of our Mexicantown and W. Vernor & Springwells Business Districts.

Site #3: Hope Village | Community Partner: Focus:HOPE
Hope Village is a neighborhood located in central Detroit and western Highland Park. Hope Village was near the epicenter of the 1967 Detroit Civil Insurrection. Since that time, the neighborhood experienced both “white flight” and the precipitous economic decline of Detroit and the auto industry. There are approximately 75 businesses in HV and, based on U.S. Census Bureau, 2011-2015 American Community Survey 5-Year Estimates, 4,098 residents (95% African American). Of these residents, 827 are children under the age of 18 (20.1% of the population); 75% of these children live in single-parent families.

ABOUT DESIGN CORE DETROIT
Design Core Detroit champions design-driven businesses and their role in strengthening Detroit’s economy. It offers services to strengthen, grow and attract design businesses, increases market demand for design services, and tells Detroit’s design story locally and globally. Design Core is the steward of Detroit’s UNESCO City of Design designation and is a partnership of the College for Creative Studies and Business Leaders for Michigan.

ABOUT DETROIT MONTH OF DESIGN
Detroit Month of Design is a citywide celebration of creativity that gathers designers and the greater community to celebrate Detroit’s role as a national and global design capital. Every September, partners from all across Detroit, from emerging studios to established companies and educational institutions, come together to show off their latest works and ideas. These cross-disciplinary events take place in all corners of the city, highlighting the work that makes Detroit a City of Design.